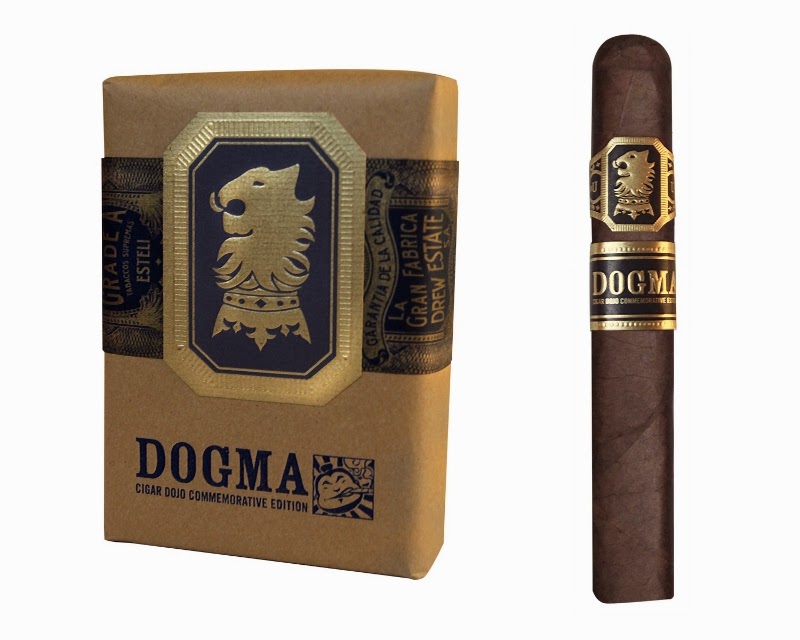 Miami, FL – Drew Estate announced today their plans to release a new size within their Undercrown cigar line. The size will be called Undercrown “Dogma”, and has been created to celebrate the one-year anniversary of the online community Cigar Dojo. The blend of “Dogma” is based on the Undercrown Corona ¡Viva! and is comprised of Mexican San Andreas wrapper, Connecticut Stalk-Cut Habano binder, and Nicaraguan & Brazilian Mata Fina fillers. The “Dogma” will come in a 6 x 56 box-pressed vitola.
When asked about the “Dogma” project, Jonathan Drew said, “we have been major supporters of Cigar Dojo from the beginning. A handful of Drew Estate employees, myself included, are Dojo members, and we have always been floored by the support Drew Estate has received on the app and website. When Eric (owner of Cigar Dojo) approached us about coming up with this special commemorative cigar, it was a no-brainer. My dad, “Baitfish” Gary, came up with the name ‘Dogma’.”
The “Dogma” will be a limited run of 10-count bundles, and will be sold exclusively through Smoke Inn, a South Florida cigar retail chain, owned by Abe Debabneh. For those based outside of Florida, the cigars will be available through Smoke Inn’s web store. The “Dogma” will be priced at $9.95 MSRP per single and $99.50 MSRP per 10-count bundle.
The flavor profile of the “Dogma” aligns with that of the Corona ¡Viva!, featuring notes of cocoa, earth, and a rich spicy character. If you enjoy the Corona ¡Viva! but would like a longer, 56 ring gauge smoke, the “Dogma” will be a new favorite.
In tandem with the release of the new “Dogma” size, Drew Estate will be running a social campaign and giveaway through their website which will allow consumers to try the cigar before it hits the market. To enter, visit http://drewestate.com/dojodogma. Unfortunately, the giveaway is not available in MA, MI, and VA due to anti-tobacco promotion laws within those states.
The Undercrown “Dogma” will be available for pre-order Friday, March 28th, 2014, through SmokeInn.com. In the meantime, make sure to enter Drew Estate’s “5 Days of ‘Dogma’” giveaway for your chance to try the cigar before anyone else in the country. If you have any questions, please contact Drew Estate’s Public & Media Relations representative, Johnny Brooke, at jbrooke (at) drewestate (dot) com.


About Drew Estate:
Founded in New York City in 1996 by two former college fraternity brothers who shared a dream to become world-class cigar makers. Jonathan Drew and Marvin Samel led Drew Estate to become one of the largest and fastest growing cigar companies in the world. Under their mantra “The Rebirth of Cigars”™ Drew Estate has defied the odds by innovating new elements to the cigar industry with their unique tobaccos and blending styles that have attracted new and old cigar enthusiasts. In their Gran Fabrica Drew Estate, their Nicaraguan headquarters, Drew Estate produces successful brands such as ACID, Herrera Estelí, Java by Drew Estate, Kentucky Fired Cured, Liga Privada, My Uzi Weighs a Ton, Natural, Nica Rustica, Tabak Especial and UnderCrown.