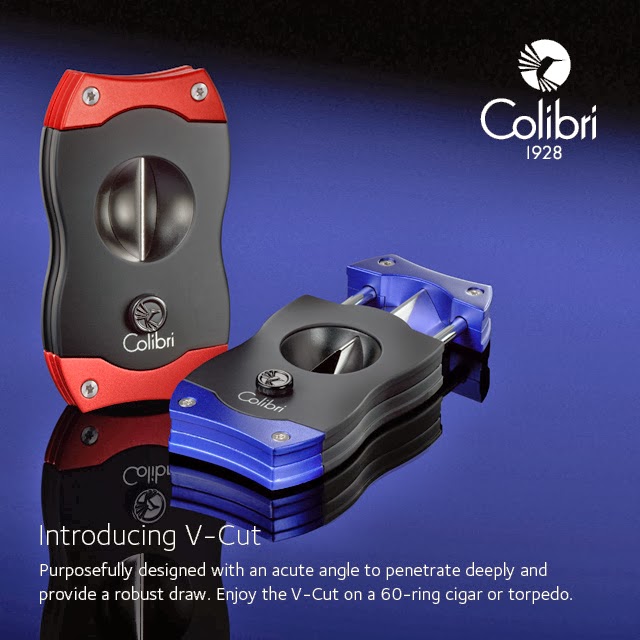 Somewhere between the clean cut of a punch and the straight cut of a guillotine exists another option to snip your cigar: the v-cutter. The v-cutter is a great way to enjoy a cigar when done right, and Colibri's V-Cut is done exceedingly well.
For the unfamiliar, a v-cutter is really just a single guillotine with a curved or v-shaped blade. Its cut creates a wedge-shaped channel narrower (and cleaner) than a guillotine's straight-cut, with a draw that's fuller than a punch.
The Colibri V-Cut is capable of doing this to a variety of cigars, including rings up to 60 gauge and figurados. It's a single blade, and both the steel and mechanics are designed to never tear the cap. The blade is spring-loaded, and a powerful spring means a quick, aggressive release without having to dig tobacco out of the works first.
An important factor in v-cutters is the weight, which Colibri's V-Cut has. While the V-Cut may add extra sag to your pocket, the heft allows you to press firmly against the cigar so it won't slip at the last moment. This is especially important with v-cuts, which require more precision than straight-cut guillotines.
With the V-Cut, Colibri has found a good balance of weight, strength and shape that makes this rather tricky cut hassle-free. It's not for everyone, and it may not be for every cigar, but at only $39—and in red, black and blue finishes—it's an easy-operating cutter.

Posted by Cigar Assessor at 11:46 AM No comments: