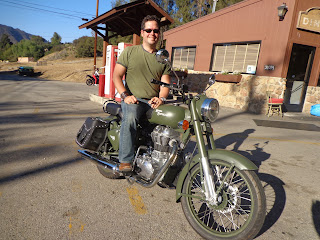 It was a beautiful Sunday afternoon when I decided to go for a ride on my motorcycle, Maxine down Sunset Blvd to the Pacific Coast Highway to Topanga Canyon and then onto Mulholland Drive and Highway to the famous motorcycle hangout called the Rock Store. Luckily, I took my Liga Privada UF-13 with me. I found out you can smoke outside the establishment. So, I set up my camera and mini tripod on my bike's saddle bags and decided to record the review of the cigar I purchased specifically to review. No chocolate or drink with me so it will be all cigar. 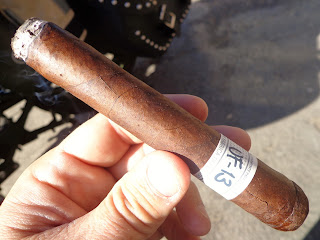 This dark chocolate well constructed, minimal veined cigar has a pigtail that looks like a mini fan.

The band has a simple factory look and as if someone hand wrote UF-13 with a sharpie on it. I sniffed the foot and smelled cocoa and hay. A smell of sweetness and hay flowed from the stick. I clipped the cap with my Xikar cutter and the cap piece unraveled. I moistened it and put it back on. I tasted old damp basement from the first dry open draws. First time for that. I lit the foot and white  full smoked kicked out from the start and I tasted a strong cedar flavor and citrus.I noticed a small crack between the cap and band. Later in this section, I got hints of nuts, salt and molasses. The nice dense grey ash held on through this section and the burn was slightly uneven. 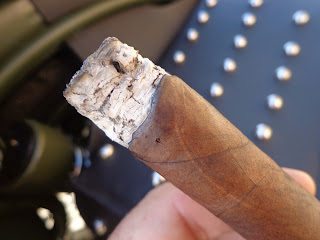 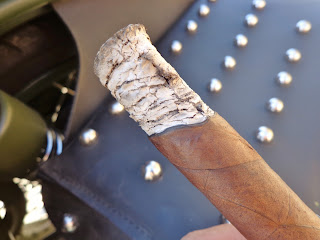 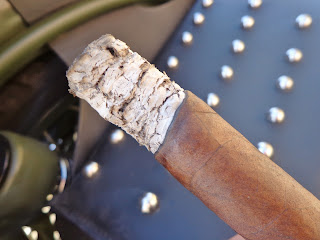 The second section is where the grey dense ash fell for the first time, a little before the halfway point. The burn was almost even and the nice white smoke still pumping out full and creamy. Notes of nuts, cedar, leather and bitter coffee was the flavors I tasted. 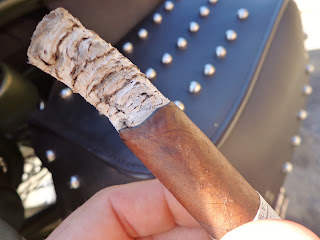 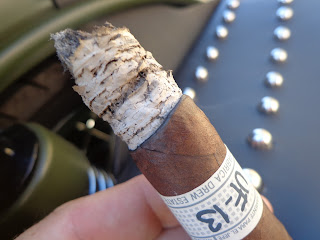 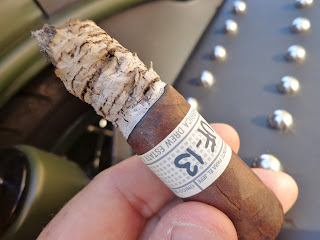 In the last section I took off the band and the ash fell for a second time. I noticed the tear I saw earlier continued from under the band. It didn't affect the cigar in any other way than appearance. The burn was almost evened out and the grey ash with streaks of black was still dense and holding on. 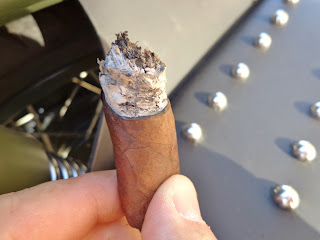 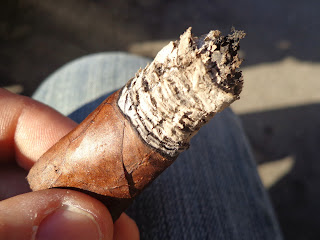 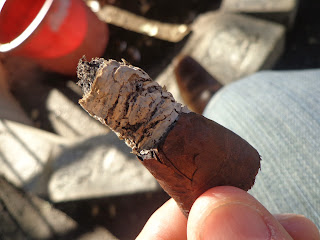 This cigar was a very nice smoke, however the price point and marketing has a bit to make me happy. After reviewing the Liga Privada No.9 and Drew Estate Undercrown, I wanted to review another Liga Privada and couldn't find them anywhere I purchase cigars. I finally found them at one shop and paid almost $19.00 for this stick. This after paying $12.50 a piece for a few No.9.

Now that will affect the way I view this stick because that is a lot of money for this cigar and it isn't worth that kind of money in my opinion. I enjoyed the No.9 much more and the UF-13 doesn't live up to the L.P. lines hype at that price and availability. -May 20, 2013