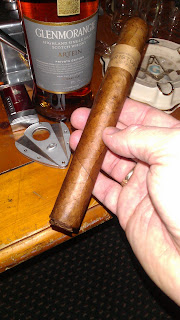 This night the music of choice was the Classic Vinyl channel on SiriusXM radio. After pouring some of my newly acquired single malt scotch into my glass, neat, I pinched the cigar until its shaggy foot popped out of the wrapper and then pulled it out completely. This was another well-constructed cigar from Kristoff; milk chocolate color, light sheen and lightly veined wrapper. I put it under my nose and gave it a light sniff. It had a very nice aroma. I grabbed my Xikar Xi1 and cut off the pig tail, giving it an unlit draw. The draw was easy. Using two wooden matches I lit the shaggy foot and it ignited instantly. The first taste of toasted nuts entered my palate with an easy draw. The smoke released from the stick was light. I sat back and enjoyed it.

A splash of the sweet caramel flavor of Glenmorangie went down smoothly with very little heat. Nice accompaniment to this cigar. 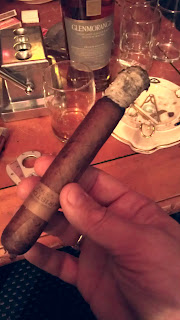 The smooth nutty flavor mellowed as the cigar’s even burn reached the first third and an earthy, leathery note appeared. The smoke kicked up a notch, medium and creamy in the mouth.  It was at this point that the grey, brown ash fell after holding strong for the first third of the smoke. 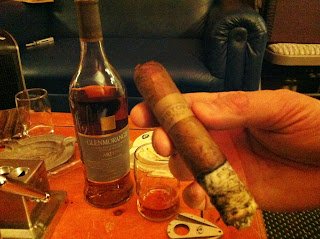 The rest of this cigar remained mellow and smooth throughout with an occasional reminder of the toasted nut flavor reminiscent of walnuts and almonds. 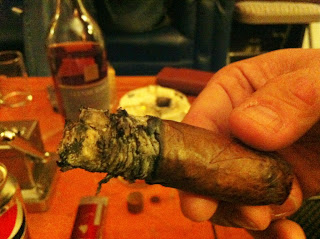 My only complaint which is very minor, was that during the last third, after the ash fell, it began to burn unevenly. But a touch up to the wrapper with a match easily resolved that problem.

Overall, this is a great cigar for those looking for a not too spicy, full flavored, medium bodied smoke. -February 22, 2013 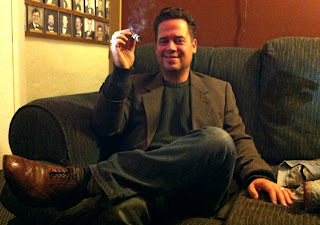 Posted by Unknown at 5:27 PM No comments: