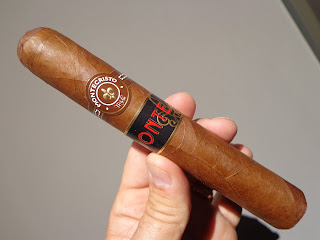 Being a fan of Altadis Cigars, I was excited to take this big stick from my humidor to review. When I was at IPCPR in Las Vegas recently, I met Joe Maldonado at the Altadis booth and we had a nice conversation about cigars. He handed me this stick and a few others to review.

The Montecristo Monte is a big well constructed, honey brown stick with minimal veins. There wasn't any hard or soft spots on this cigar. It is double banded. One smaller brown band had the Montecristo name with a Fleur De Lis. The second bigger band has Monte in bold letters. It also has a double binder of Dominican Olor and Nicaraguan Corojo. I smelled the foot and the scent reminded me of a baseball field smell. The stick's aroma was a sweaty barnyard. During this review, I decided to try toasting the foot before cutting the cap off. Joe told me a story about a friend of his who would toasted the foot, clip the cap and them blow out a couple times before inhaling. He would do this to get all the dust and other stuff that might have settled in the foot form sitting on the shelve before being boxed. No dry draw today.

I toasted the foot and clipped the cap. I then blew out a few times and then toasted the foot some more as I inhaled the full smoke into my mouth. I tasted hints of cedar in those first few draws. Later in this first third, honey and nuts added to the flavor notes. The burn was almost even and the nice grey ash held it's form during this section. 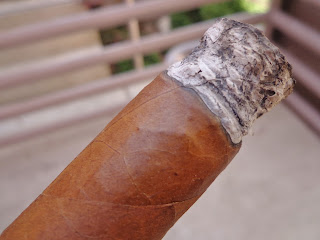 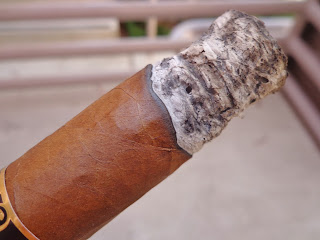 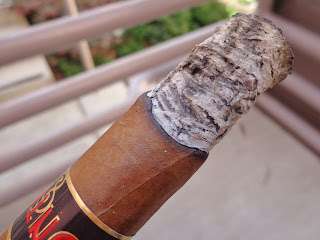 As the burn line passed into the second third of this cigar, the ash fell for the first time. The smoke continued to pump out full and I tasted notes of wood, leather, cedar and salt. The burn line had evened out. I removed the first band without incident of sticking or tearing. There wasn't any defects underneath. 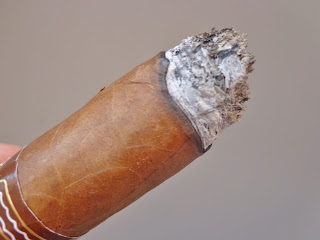 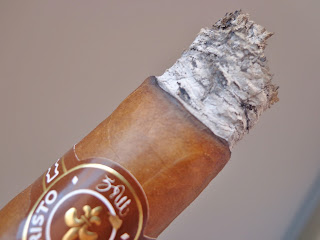 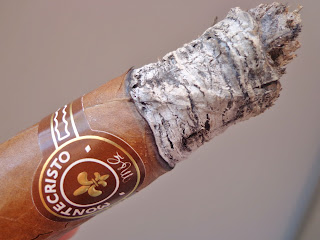 The ash fell again in the last section and the smoke remained pumping out full. I removed the second smaller band also without incident. Nuttiness, leather and citrus was the flavors I detected. I smoked and enjoyed this cigar until I couldn't hold it anymore. 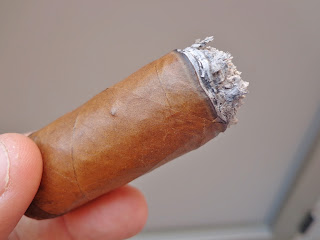 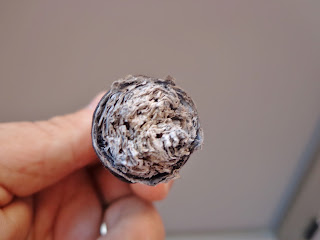 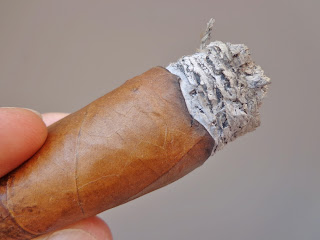 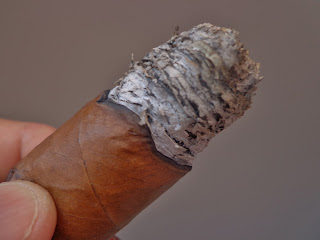 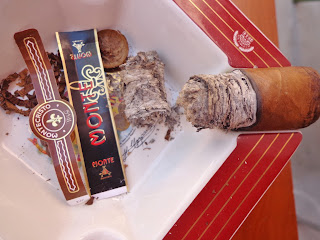 I haven't smoked many Montecristo's in my years as a cigar smoker. This one has made me very curious about trying others. I give this cigar the Cigar Assessor's Approved Cigar. If see it out there grab some and put them in your humidor. You'll be glad you did. - August 5, 2013 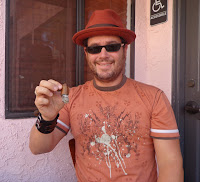