Celebrate the 6 month anniversary of the Cigar Assessor Blog! 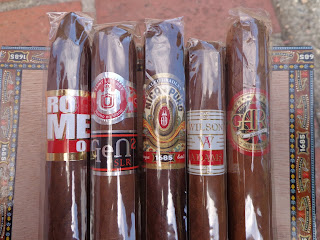 Celebrate the 6 month anniversary of the Cigar Assessor Blog!

Enter to win a sampler pack of some of my favorite cigar picks!


Alec Bradley, Altadis, Ventura Cigar Company, Wilson Adams and Garo have generously donated cigars to help celebrate! I cannot thank them enough for being a part of the festivities.


What would a Cigar Assessor contest be without a little good natured humor?


We all know how cigar lovers like to share pictures of themselves smoking their favorite cigar. With that in mind, lets get creative... Take a photo of yourself smoking a cigar as close to a Starbucks Coffee Store as possible. Make sure you can see Starbucks signage. Then upload the photo to the Cigar Assessor Facebook page to enter. Three pictures with the most likes will each win a 5 cigar sampler pack. One 10-pack Grand Prize will be awarded for most creative picture, at The Cigar Assessor's discretion. If grand prize winner also get the most likes, then the next runner up will win a 5 cigar sampler pack.


The contest begins today and will close on, September 22nd at midnight. Winners will be notified via Facebook by September 24th.


Good luck to all!