This agreement expands Royal Agio Cigars’ reach across the broad
channels of tobacco distribution throughout the U.S. and provides the
opportunity to market Panter, Mehari’s and Balmoral brands in the
optimal way.

Boris Wintermans, CEO of Royal Agio Cigars explains: “Although our comp
anies are quite different, there was an immediate chemistry between our two
family businesses. Both companies aim for creating purposeful brands for the
long run and are committed to making a difference. We both have the ambition
to expand in the U.S. market and the Royal Agio portfolio compliments the Drew
Estate brand portfolio perfectly.”

“Drew Estate Tobacco Company, including both the Drew Estate premium division
and the popular market side called, “Half a Sandwich” has tremendous respect for the
Royal Agio team and the special family tradition behind all of their fine cigars,” explains
Jonathan Drew, co-founder.
“At Drew Estate, we understand that success comes through purposeful collaboration.
That’s why we are so excited about this new partnership with Royal Agio,” according to
Drew Estate President, Michael Cellucci.

About Drew Estate:
Founded in New York City in 1996 by two former college fraternity brothers, who
shared a dream to become world-class cigar makers. Jonathan Drew and Marvin
Samel led Drew Estate to become one of the largest and fastest growing cigar companies
in the world. Under their mantra “The Rebirth of Cigars”™, Drew Estate has defied the
odds by innovating new elements to the cigar industry with their unique tobaccos and blending
styles that have attracted new and old cigar enthusiasts. 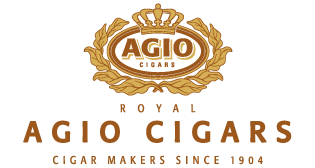 At the centennial, her Majesty Queen of the Netherlands awarded Agio Cigars with the Royal warrant of appointment. From its home base in the Dutch town of Duizel, cigars are being sent to more than 100countries worldwide. Production facilities in the Netherlands, Belgium, Sri Lanka and the DominicanRepublic combine state of the art technology with the best tobaccos available to result in the highestquality cigars for cigar lovers all over the world.

For more information on both companies, please visit our websites:
www.drewestate.com
www.agiocigars.com

Posted by Cigar Assessor at 9:00 AM 5 comments: