Drew EstatePress Release
Drew Estate Names Willy Herrera as “Master Blender”
Miami, FL, May 15, 2014 Drew Estate announced today that Willy Herrera will
become the “Master Blender” of Drew Estate, effective immediately. Herrera was originally recruited by Drew Estate to create a signature brand illustrating his Cuban heritage and “Cubanesque” blending style. After working with him over the past three years in Nicaragua, Drew Estate determined he was suited to lead their blending team. This represents a major change for Drew Estate, marking the first occasion where
someone of Cuban descent has held a top-level position at the company.
Herrera’s new responsibilities will place him at the front and center of Drew Estate’s blending team, which will allow him to channel his passion and energy into creating new blends and maintaining Drew Estate’s current signature blends.
Herrera’s talents were honed over the eight years of “on-the-job training”, running the El Titan de Bronze factory in the Little Havana neighborhood of Miami, Florida. His responsibilities at El Titan de Bronze included tobacco purchasing, production, blending and quality control.
Jonathan Drew, company co-founder, had this to say about Herrera:
Authenticity is the key factor that originally attracted the DE shareholders to Willy. I personally know the challenges and skill set necessary to lead a premium cigar factory at all stages of development, fifteen employees to fifteen hundred. Willy has the main ingredients, passion, humility and confidence to achieve great results. It is important for me to clarify that Willy is not in charge of running La Gran Fabrica Drew Estate. His position is a newly created, specific role–built around hisgreatest talent, Master Blender.
We intend to challenge Willy in expanding his blending universe, from Liga Privada to Kentucky Fire Cured. This will not be easy for him. Willy will report directly to me, and I
am not an easy person to work for. I am very demanding and require absolute excellence when it comes to creativity.”
Drew Estate Names Willy Herrera as “Master Blender”
Willy Herrera stated that, “my passion and love for Nicaragua has grown immensely over
the pastthree years. I lived in Nicaragua while we blended our Herrera Esteli line and
during that time, really got to know the people at the factory. I grew to love the country,
especially Estelí. This is an incredible opportunity, and it’s a dream come true for me to
become “Master Blender” of a global company as well respectedas Drew Estate. There
are many people who have believed in me along this journey, especially my family.”
Due to Drew Estate’s decision to appoint Herrera as “Master Blender”, they have also decided to
bring the new “NORTENO by Willy Herrera” line into production at Drew Estate, as opposed
to Joya de Nicaragua, where it was originally to be produced. Additionally, this will allow
Joya de Nicaragua to focus on production of the MUWAT Kentucky Fire Cured line, which
is currently backordered, along with the new Joya de Nicaragua products to be released
at IPCPR. The “NORTENO by Willy Herrera” line will debut at the 2014 IPCPR tradeshow in
Las Vegas, Nevada, and a formal press release will follow with more information about that
project.
About Drew Estate:
Founded in New York City in 1996. Drew Estate has become one of the fastest growing tobacco
companies in the world. Under their mantra “The Rebirth of Cigars”TM, Drew Estate has led
The“Boutique Craft” movement by innovating new elements to the tobacco industry with
their unique tobaccos and blending styles that have attracted new and old cigar enthusiasts.
In their Gran Fabrica Drew Estate, the Nicaraguan headquarters, Drew Estate produces
successful brands such as ACID, Herrera Estelí, Java by Drew Estate, Kentucky Fired
Cured, Liga Privada, MUWAT, Natural, Nica Rustica, Tabak Especial and UnderCrown.
Posted by Cigar Assessor at 10:40 AM No comments:

Between April 26, 2010 and November 27, 2013 the U.S. Food & Drug Administration publicly posted their intent to deem cigars as subject to federal regulation. Therefore, it's incumbent upon the cigar enthusiasts of the United States to voice their opposition to any proposed new regulation of premium/traditional cigars by the United States Government.

H.R. 792 and S. 772 have been filed in both the U.S. House of Representatives and the U.S. Senate under the banner "To amend the Federal Food, Drug, and Cosmetic Act to clarify the Food and Drug Administration's jurisdiction over certain tobacco products, and to protect jobs and small business involved in the sale, manufacturing and distrubtion of traditional and premium cigars." This bi-partisan legislation would decree that premium/traditional cigars should be off limits to FDA regulation and, 'to clarify the Food & Drug Administration's jurisdiction' in the 'sale, manufacturing and distribution of traditional and premium cigars.'

Such legislation could have a profound impact on protecting the industry, from the fields and factories of Central America , to the supply-chain throughout this nation, to the community tobacconist, to enjoying a cigar in the local shop, club or back porch.

We can assure you, nothing could rip the soul of the cigar industry apart, like FDA actions. For example, some of the (again) hypothetical possibilities, but that are not beyond the realm of reason include: No more walk in humidors (Canadian model); Limits on advertising and promotions; Banning the very word cigar or tobacco; Manufacturers having to submit blends to FDA for "testing," before heading to your local shop - imagine the impact on boutique cigar makers; Adverse impact on flavored tobacco products; And price impact due to new fees on manufacturers. This, is the short list.

H.R.792 protects thousands of small businesses like my local cigar shop and the jobs that make up the fragile, intimate, premium cigar industry.  If the FDA is allowed to expand the Tobacco Control Act's regulations to include premium cigars, hundreds of thousands of jobs in the United States, Nicaragua, Honduras and the Dominican Republic would be at stake.

Why is H.R.792 so important?  Because I want to continue to have the freedom to purchase and enjoy a fine cigar!

Some of the regulations the FDA may consider include:

• Ban all flavored cigars, that are enjoyed by legal-age adults;

• Limits on cigar marketing and advertising;

• Eliminate special release, vintage and small-batch cigars, due to mandates that cigar blends be submitted, tested and pre-approved by the FDA before being released for sale;

• Ban logo cigar merchandise such as hats, t-shirts and jackets.

I’m urging you to join several of your colleagues and co-sponsor H.R. 792, "To amend the Federal Food, Drug, and Cosmetic Act to clarify the Food and Drug Administration's jurisdiction over certain tobacco products, and to protect jobs and small businesses involved in the sale, manufacturing and distribution of traditional and premium cigars."

Posted by Cigar Assessor at 9:50 AM 2 comments:

Drew Estate Press Release
Drew Estate Announces Exclusive Distributorship of
Tsuge Pipe Company
Miami, FL.
May 2, 2014:
Drew Estate and Tsuge Pipe Company Ltd. have announced a new strategic alliance between the
two companies with news that Drew Estate will become the exclusive distributor of Tsuge in the
United States and Canada. Drew Estate will begin selling the Tsuge lineat the 2014 IPCPR show in
Las Vegas, Nevada in July 2014. Drew Estate entered the pipe market byreleasing a line of custom
pipe tobacco blends at the 2013 IPCPR tradeshow, and this new announcement stands to cement
their involvement in the premium pipe and pipe tobacco market.

Started in 1936 by Kyoichiro Tsuge, Tsuge Pipe Company and the Tsuge family have a rich history
of craftsmanship.  Prior to making pipes, the Tsuge family were Samurai swordsmiths for hundreds of
years. Kyoichiro Tsuge started making pipes around the turn of the century and, as a company, Tsuge
has mastered the art of pipe making. Tsuge draws from the traditions of Italian and Danish pipe makers,
having trained with world renowned pipe maker Sixten Ivarrson, and has added unique touches of
Japanese artisanship along the way.

Tsuge is best known for their renowned “Ikebana” line of handcrafted briar pipes. The “Ikebana” collection
features Tsuge’s highest quality work, retailing for up to multiple thousands of dollars. Tsuge is also known
for their machine made line of briar pipes, which features unique shapes and metals. This portion of Tsuge’s
pipe collection is a more affordable option compared to the “Ikebana” line. When reached for comment, Drew
Estate president Michael Cellucci stated,  “I have been a fan of Tsuge’s incredible pipes for many years.
We approached Tsuge about distributing their pipes in the United States and Canada, and they were receptive
of the idea. Drew Estate’s efforts in the pipe tobacco market have proved to be successful, and we hope to
channel this success into representing the Tsuge brand in the United States and Canada.” Jonathan Drew,
co-founder of Drew Estate, commented from his Miami office: “One of the most honored moments of my life
was when Sab Tsuge, president of Tsuge,came to our third meeting in Asakusa, Tokyo, Japan dressed in a
formal black kimono and accepted our proposed deal to grow the Tsuge brand in North America together.

Nanna Ivarrson, and 10 of Tsuge’s top Japanese resellers at Komagata Dojo restaurant in old downtown Tokyo.
We listened to stories and history; Mario Takeyama’s family is from Asakusa town where Tsuge has their factory
and headquarters. The bond between Mario and Sab Tsuge was evident throughout all of our meetings and
illustrates the global direction of Drew Estate. Drew Estate representatives will be stationed at the Tsuge booth
at the upcoming Chicago Pipe Show, being held at the Pheasant Run Resort in St. Charles, Illinois on May 3rd
and 4th, 2014. If you would like to speak with Drew Estate representative about this news, please visit the
Tsuge booth. 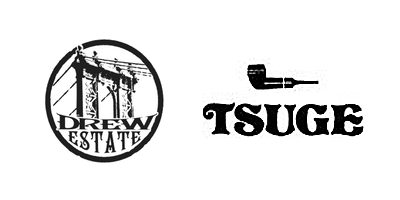 About Drew Estate:
Founded in New York City in 1996. Drew Estate has become one of the fastest growing tobacco
companies in the world. Under their mantra “The Rebirth of Cigars”™.
Drew Estate has led The“Boutique Craft” movement by innovating new elements to the tobacco industry with their unique
tobaccos and blending styles that have attracted new and old cigar enthusiasts. In their Gran Fabrica
Drew Estate, the Nicaraguan headquarters, Drew Estate produces successful brands such as ACID,
Herrera Estelí, Java by Drew Estate, Kentucky Fired Cured, Liga Privada, MUWAT, Natural, Nica
Rustica, Tabak Especial and UnderCrown.
About Tsuge:
TSUGE has paved the way of the Japanese pipe making with Kyoichiro who dedicated his life to
pipes. The global brand TSUGE continues to step forward as a bearer of smoking culture in
the future. Pipes of the TSUGE brand are made with infinite passion and excellent techniques
of the craftsmen. The unparalleled beauty and quality have attracted pipe lovers around the world.
Posted by Cigar Assessor at 9:31 PM No comments: